As we approach the end of the year, it is a time to reflect on the events of the year, and to look forward to what 2023 will bring.

It has been a difficult year for the UK on a number of fronts, which I will not dwell on, but 2022 will be remembered for the death of Her Majesty Queen Elizabeth, who reigned for 70 years.  She was public service personified.  Her role as Sovereign, plus her family, were everything to her.  She will be sorely missed.  We are now in the reign of Charles III, and long may he reign.  However, is it just me?  I still find it strange singing God Save The King after so long of singing God Save The Queen.

It has been a very busy year for Tidworth Town Council, the old community centre was closed in March, the Council moved to its temporary home at Castledown Business Park, and work finally started on the new Civic Centre and Community Policing Team hub after so many years of planning.  It is fair to say that this project has taken up an awful amount of my time over the last two and a half years.  If all goes to plan, the Civic Centre should open in October/November 2023.  I am sure it will be a wonderful asset for the community for many years to come!

In addition to the Civic Centre, the Council has moved forward with plans for allotments off Humber Lane, for which a planning application as now been submitted, and a skate park on the Esso field.  In addition to these projects, the Council has run a number of community events, such as two very successful open air cinema showings, the Jubilee torch event, a Halloween trail competition, a community litter pick and our most successful Christmas event ever on 3 December at the Tidworth Leisure Centre.  Finally, the Remembrance event for the Town was held at the Royal British Legion this year, for which there was a very good turnout from the community.

Next year will be no less busy.  In addition to the Civic Centre opening in October, we hope that the allotments and skate park will be opened during the year too! We will have a Coronation event on 6 May, an open-air cinema event in the summer and of course our Christmas event should be in the new Civic Centre.  However, I am also very pleased to confirm that the Tidworth Town Festival will return next year, following a three-year break caused by the pandemic.

I conclude by wishing you all a Merry Christmas and a very happy New Year, and hope the New Year brings you what you wish for! 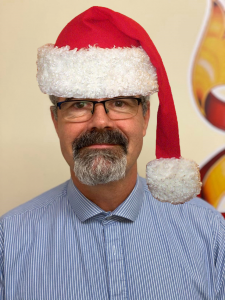